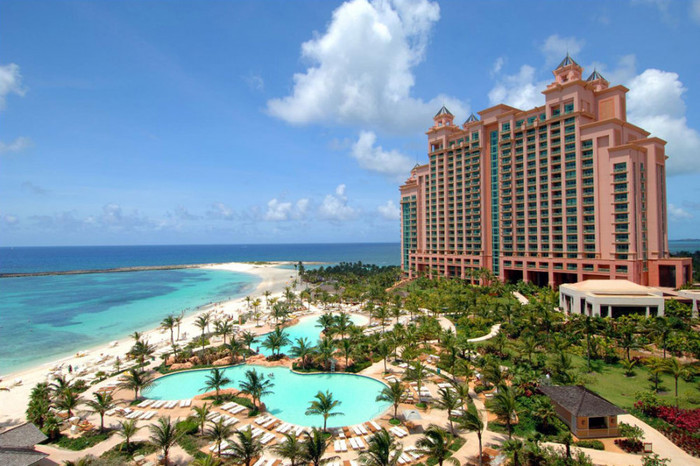 In 1994, Sol Kerzner purchased a languishing Resorts International from entertainer/entrepreneur Merv Griffin. This once-popular jet-set playground on Paradise Island had seen better days, but from the start Kerzner saw its potential. Struck by the beauty of the location, on a lush tropical island with a pristine two-mile white sand beach, Kerzner vowed to build the most engaging and astounding resort the world had ever seen, a place where dreams would be made real and all who experienced it would fall under its mystical spell… whilst having a whole lot of fun in the process.

Following a decade of success, Atlantis, Paradise Island continued its growth as Kerzner International embarked on a third phase of development with its approximately $1 billion expansion in 2007. Adding to Atlantis’ existing 2,317 rooms and the world’s largest open-air marine habitat, the Phase III expansion includes: the luxurious 600-room resort within the resort, The Cove Atlantis; a 497-key condo-hotel, The Reef Atlantis; a 14-acre dolphin habitat and education center, Dolphin Cay; a 63-acre addition to the waterscape, now called Aquaventure and a total of 140 acres; Aura, a nightclub from the operators of Hakkasan Group; approximately 100,000 additional square feet of new conference facilities and a total of over 500,000 indoor and outdoor space creating the largest conference space in the Caribbean; and the 30,000 square-foot flagship Mandara Spa.

These rates are quoted exclusive of mandatory taxes, resort levies, gratuities, resort fees, and other charges. The rates above will be provided three (3) days pre/post arrival/departure dates, based on availability.

Each individual guest will be responsible for their own room, resort charges and other incidental charges. Guests shall provide an acceptable credit card at the time of making the reservation or upon check in to cover all charges occurred by the guest. Each attendee shall submit a deposit equal to one (1) night’s guest room/suite rate as a guarantee, at the time the attendee makes the reservation. Refunds will be issued on an individual attendee’s reservations cancelled at least 21 days in advance of the confirmed arrival date. Guaranteed reservations are held until 11:59 PM for the scheduled arrival date.

Group rates are available on a space available basis three days before and three days after the NAHAD official Convention dates. Please make plans to book early to receive the best possible rates and availability. The NAHAD room block will be held until March 20, 2020, as long as sleeping rooms remain available. Several times in the past years, NAHAD has achieved a sold-out capacity, so please book early to avoid disappointment.

Nassau International Airport (NAS) is the closest airport to the Atlantis Resort, located approximately 20 minutes west. You must have a valid passport for entrance into the Bahamas.

"This year's NAHAD conference showed me, once again, what great value can be attained from attending and getting involved. The networking is unsurpassed, as well as the great speakers NAHAD offers. Our company will continue to be a part of this great organization and conference."